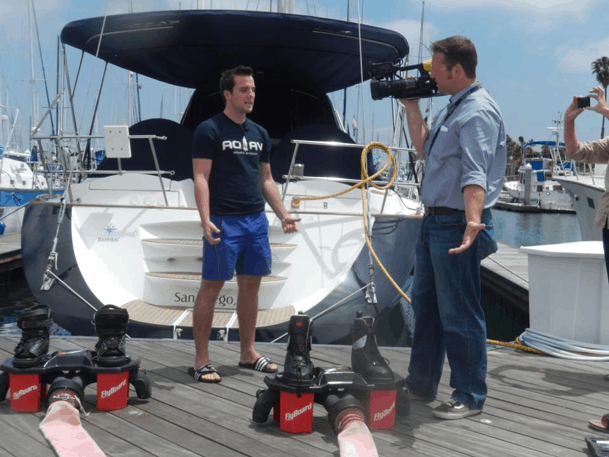 Aquatic Aviation is on 10 news with Joe (not so) Little. He came out to our location in Harbor Island to check it out. (link)

SAN DIEGO – Take a stroll along San Diego Bay and you may catch a glimpse of a new extreme watersport in action.

The sport is called “Flyboarding” and is brought to you by Aquatic Aviation. They’re opening a rental store this Saturday at San Diego Bay Adventures on Harbor Island.

The Flyboard crosses a wakeboard with a jet ski to produce a unique experience that lifts the ride 30-feet above the water, even allowing the rider to swim like a dolphin.

“Basically, all of the power comes through the jet ski, through [a] 54-foot hose, out of these two jets … This is where all the propulsion comes out,” Aquatic Aviation co-owner Andrew Hickey said while holding a Flyboard and pointing to two nozzles on each side of the board.

It’s the same technology used by the Jetlev in Mission Bay, which opened last month. The Jetlev is more of a jet pack on the rider’s back, while the Flyboard is attached to the rider’s feet.

But unlike the Jetlev, the Flyboard allows the rider to dive and swim like a dolphin.

“One of the coolest animals around the world is the dolphin. To be able to recreate what they do in the water is just a phenomenal feeling,” said Hickey. “We think it’s just going to bring a lot more people to San Diego, just to want to do this with us.”

Hickey said rookies, ages 14 to 70, can begin flying in less than five minutes and can swim like a dolphin their first day.