Myths Vs. Facts Of Flyboarding For The First Time

Home | Myths Vs. Facts Of Flyboarding For The First Time 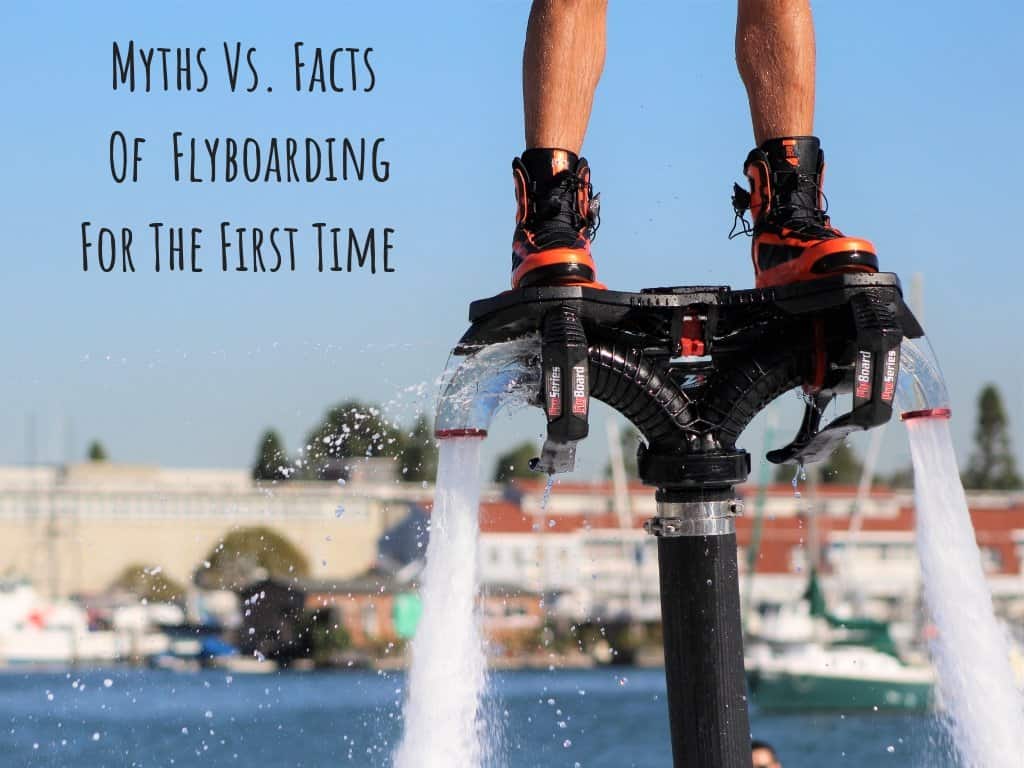 We don’t want our customers to be afraid of trying Flyboarding for the first time because of something they might have heard elsewhere. We want our first time flyers comfortable and informed about what they are about to try.

Here are seven common myths vs. facts about Flyboarding for the first time.

Myth: You’ll pick it up immediately.

Fact: It will take some time to get the hang of the board.

The Flyboard is unlike anything you’ve ever tried before. It takes time to get comfortable with the power beneath your feet along with maneuverability. The board only requires small movements in your toes, feet, and ankles to control it. Your upper body doesn’t contribute much. However, most people pick it up within 5-10 minutes. The closest thing we can compare Flyboarding to is a segway or hoverboard but with a third axis, up and down.

Myth: You’re going to do a back flip during your first lesson.

Back flips involve much more than just getting on a board and chucking yourself backwards. Back flips involve a distinct setup and execution. If you don’t know how to properly setup and execute the flip, you could seriously hurt yourself or others by hitting the jetski, running into the hose, or many other ways. Along with technique being a vast part of a flip, power comes into play as well. Depending on your weight, you will require a certain amount of RPMs to help you finish a flip. Especially important for beginners, you will also require some height which you will not receive on your first lesson. Many times, rental companies will get a flyer who comes out and throws a back flip without letting their instructor know. This is a one way ticket back to the dock.

Expect to possibly learn a dolphin dive, a 360 spin, but not a backflip during your first lesson.

Fact: You will flare around at first.

Most first time flyers flare around when they first try out the board, which is expected and anticipated by the instructors. It’s common to wave your arms around to “balance,” however, anything from your waist up has no impact on flying. When a flyer learns to control their arms, it makes their experience that much more enjoyable. We always recommend that the flyer grab their life vest around the neckline area in order to reduce the chance of them getting off balanced.

Myth: You’re too old to fly.

Fact: There is no age limit.

Anyone can fly as long as you are physically able to. We have 50+ year olds who come into our office and say that they’re too old to fly by claiming they won’t pick it up as fast as their kids. Some kids do pick Flyboarding up faster, however, hat doesn’t mean there is an age limit on flying. Yes, it may take a bit longer for a 50+ year old to pick it up, but no, that doesn’t mean there is an age cap on who can fly.

The oldest person I’ve ever flown was 89 years old and she picked it up within 5 minutes. Age should not be an excuse to not try Flyboarding.

Myth: You’re going to go to full extension on the hose.

During pre-flight, we explain that the power from the jetski allows you to reach heights of up to 45 feet. No, you will not be going 45 feet on your first lesson. In order to do that, you would need full RPMs and a beginner is not ready to handle that amount of power yet. Whenever you have full control of the board and are comfortable on it is the only time you should ever reach full throttle on the ski. Normally, full throttle comes after quite a few lessons. A beginner can easily handle 5ft-12ft. Your height depends on how well you are handling the board. Your instructor will never give you more power than they think you are capable of handling.

Fact: You have a coast guard approved life vest on and the board itself floats.

Upon jumping into the water, you are given a coast guard approved life vest and a helmet. You now float without having to try. When you are put into the bindings and strapped to the Flyboard, you still float. You will be riding the Zapata Racing Flyboard Pro Series which floats when the ski is in idle and or turned off. Many people think that they will sink if something goes wrong and are nervous because they are strapped to the board. The board and rider both float, allowing the rider to relax in the water when they are not flying.

Falling happens especially when you are first starting out. Beginners are kept around 5ft-12ft so that if and when they do fall, it doesn’t have to end their lesson. Falling becomes painful when you fly 20ft+. There are some occasions if you fall just right, even from 5ft, if you belly flop you may get the wind knocked out of you. However, it’s rare and doesn't last long. If the idea of falling still makes you uneasy, go stand next to any deep body of water and just let yourself fall back into it. That is similar to how falling feels on the board. Everyone falls and being afraid of falling shouldn’t stop you from wanting to fly.